On 14 and 15 April, the first games of the quarterfinals of the Champions League 2015 season took place.

The FC Barcelona and FC Porto dominated their game considerably and each won 3 to 1.
In Italian-French duel Juventus Turin could prevail against AS Monaco with 1 to 0, and in Spanish derby between Atletico and Real Madrid there was no Goals.

Now all fans look eagerly awaiting the games on Tuesday and Wednesday. Barcelona and FC Porto can wait. But FC Bayern Munich must win in their own stadium with 2 to 0.

Even Paris St. Germain need a 2 to 0, but the match is in the stadium of Barcelona! Juventus does have a 1 to 0 lead, but it is quickly away and the match is at home of AS Monaco. And in the Spanish derby is still nothing decided!Here it will be particularly exciting, and it’s a new round in battle for the no. 1 in the Spanish capital.

On Wednesday evening we know, who is in the semifinals on 5 May, and can continue dream the big dream – Final 2015 in Berlin. 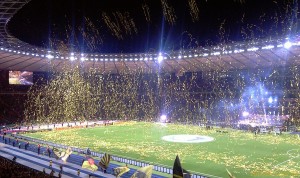 
In Berlin and Germany – SCLS – is your reliable and exclusive partner for all travel related Services and ground Transportation Service. Book our shuttle service or take a nice sightseeing trip. With our exclusive limousine service you can go for a relaxed trip. Book easily through our website www.scl-service.de/en/contact/ (see contact form) or via e-mail at info@scl-service.de.

Book early with -SCLS- your individual and exclusive Limousine and Chauffeur service for the Champions League Final 2015 in Berlin!